Consistently at the head of the field in its capacity class of the naked sector, the Z900 is available in two versions for 2020, a full power machine rated at 125 PS (92.2 kW) and an A2 specification model with 95 PS (70kW) available for the EU regions.

This rider-centric approach extends to the cockpit area as well where a 10.9 cm multi-function TFT meter screen appears for the first time displaying all the essential rider information plus allowing the rider to interrogate certain reporting functions of the machine using a Bluetooth connection via the unique Kawasaki Rideology App for smartphones.

Functions that can be seen on the smartphone screen when connected via Bluetooth include vehicle information such as remaining fuel, distance covered and maintenance schedule. General settings such as preferred units and date format can be adjusted via Smartphone while the TFT screen itself can also show – with an icon – if a telephone call or email has been received. Need power for the phone or other devices? An under-seat USB power socket is just one of the many Kawasaki Genuine Accessory items available for the latest Z900.

Making sure the Z900 tracks in the right direction, the new original equipment tyre is now the much-praised Dunlop Sportmax Roadsport 2 and turning darkness into light, the Z900 is equipped with an LED head and tail lamp plus licence plate light and indicators. 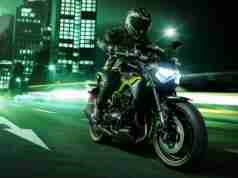